A Children’s History of India 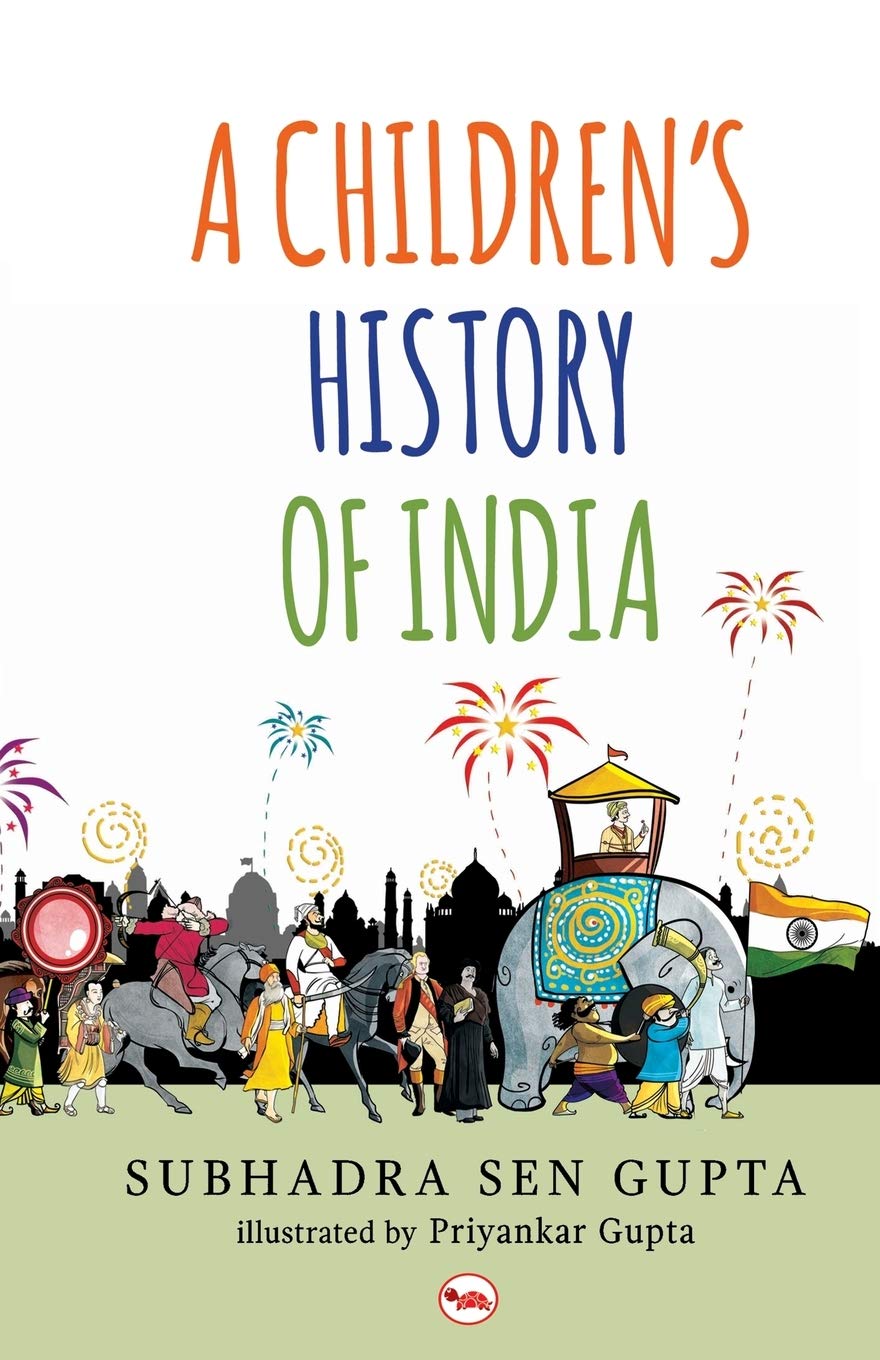 Which were the first cities of India and how were they discovered? What was it like living in Mughal times? How did the British, who had come to trade in India, end up ruling the country? How has India changed after Independence?

Delve into India’s past to discover the answers to these questions and many more in this comprehensive history of our nation. Journey through time to visit the baths and palaces of the first cities of Harappa, the stupas of Ashoka and the flamboyant courts of the great Mughals, rich in art, culture and architecture. Learn how the revolution of 1857 really started and march alongside Gandhi on his quest for an India free from British rule. Plus, discover more about each period through fun and easy ‘To do’ activities. Told in simple, lucid prose and interspersed with beautiful illustrations, A Children’s History of India makes learning history a fun and engaging experience for readers of all ages.

~ The Landscape ~ The Monsoons ~ Discovering the Past ~

In the beginning, they called the land Jambudvipa, the land of the rose apple. A land of plenty, with the soaring snowcapped mountain ranges of the Himalayas in the north and the tumultuous waters of the Indian Ocean in the south. A land covered by a network of ever-flowing rivers, bringing the promise of fertile soil, and generous harvests. The wavelashed coastal regions of the peninsula encouraged adventure and trade and the forests were filled with the bounties of nature. It was a land that welcomed people, encouraged them to weave cloth and mould pottery, to dance and sing, to experiment with spices and live off the soil.

This generous land would one day be named India, after a river, the Indus. And from the time of the Aryans, we call our country Bharatvarsha, after an Aryan tribe, the Bharatas. However, its earliest inhabitants named it after a fruit—the jambu—the rose apple or jamun.

So since ancient times, India was Jambudvipa, or the island of the rose apple.

India is so big that it has every kind of landscape imaginable—mountains, plains, deserts, plateaus, deltas and coasts. Its climate ranges from the icy winters of Ladakh to the tropical summers of Kerala. And all these geographical features have played an important part in our history.

Let’s first study the physical map of modern India. The Himalayan mountain range stands like a snowy crown in the north, separating India from the rest of Asia. This range, an immense 2,400 kilometres long, has several romantic names steeped in history and legend—Karakoram, Hindu Kush, Pir Panjal—and peaks like the Everest, the Annapurna and the Kangchenjunga. During ancient times, when invading armies moved only by land, these mountains acted like the ramparts of a fortress, discouraging attacks and allowing India to live in comparative peace.

Of course, there were mountain passes like the Khyber and the Bolan in the north-west; these were mostly used by traders to take our goods as far as Europe but they also let in invaders—from Alexander in the third century BCE to Babur in the sixteenth century.

Rivers are at the heart of our civilization. The Himalayas are the source of three mighty rivers—the Indus, the Ganga and the Brahmaputra, that have spread their network through tributaries across the land from Punjab to Assam. The Indus flows out of Tibet, curves south into north India and then flows into the Arabian Sea in today’s Pakistan. The Ganga rises in a glacial cave in Uttarakhand and then moves east towards the Bay of Bengal, creating one of the world’s biggest and most fertile alluvial plains.

The Indo Gangetic plain is at the heart of India’s civilization and has seen some of the most important events in our history—from the Buddha standing at its banks in Varanasi to the rise and fall of the famous city of Pataliputra. The mighty Brahmaputra also starts its journey in Tibet but turns east and flows through Arunachal Pradesh and Assam, only to turn west into modern Bangladesh,

where it meets the Padma, a tributary of the Ganga. Here, the many streams of the Ganga and Brahmaputra flow into the Bay of Bengal, creating a delta criss-crossed by streams that has been coveted over centuries by different invaders for its fertile soil. Similarly, in the south, the great kingdoms rose and fell by the rivers, like the fabulous city of Vijayanagar that stood by the Tungabhadra. The Narmada and the Godavari brought life to central India; and the rice, spice and cotton fields of the Deccan were fed by the waters of the Krishna and the Kaveri. Cotton was grown and then woven into brightly coloured fabrics that were loaded on to ships that voyaged to Arabia and Mozambique, Java and Bali. Along with items of trade, traders carried with them the rich heritage of our culture.

The many ports along the western and eastern coasts, like Kaveripattinam, Bharuch and Kochi, saw many Arab, Malay and Chinese traders. Soon enough, the cotton and spices that we were famous for brought the Portuguese, the French and the English to our shores. They were not interested in peaceful trade but came to destroy, conquer and colonize the country and changed India’s history forever.

Indians and Geography The ancient Indians were never very keen to draw accurate maps. In the Puranas, they described the world as a flat disc with a mythical mountain called Meru at the centre, surrounded by seas and seven islands or dvipas. These seas were said to be made not just of water but also milk, treacle, butter and ghee!

Another mighty force of history races across the sky in the form of rain-laden clouds. The monsoon winds rise up in the Indian Ocean during summer and then, like clockwork, they move north, up the Indian landmass, bringing rain. One branch comes up from the Arabian Sea, the other from the Bay of Bengal and as they collide with the Himalayas, they pour their life-giving rain all across the land. They water the wheat fields of Punjab, the paddy fields of Bengal and the forests of Madhya Pradesh. By autumn, the same winds move in the opposite direction, raining on Tamil Nadu and Kerala.

When Arab sailors discovered how these winds moved like clockwork across the oceans they used them to sail to and back from India. So it was the monsoon winds that first brought Arab, and then European, trading ships to our ports.The magic of the monsoon rains—varsha—is an integral part of our culture, as the whole land looks up anxiously to the sky for those first grey cumulonimbus clouds. Kalidasa would compose a paean, a song of praise, to the clouds in Meghdutam. We dance and sing and celebrate its arrival with colourful festivals. Rabindranath Tagore writes,

Lightning darts through the clouds, ripping them,Dotting the sky with sharp, crooked smiles.Indra’s Thunder In ancient times, Indians prayed to Lord Indra, the god of thunder and lightning to bring rain. Our myths say that every summer Indra rides out on his celestial elephant Airavata to battle Vritra, the demon of drought. Discovering the Past

India is an ancient land, and that is why we have so much history to study in school! For example, the cities of the Harappan civilization were built nearly 5,000 years ago. Also, since the land is so vast, kingdoms have risen and fallen all across it, sometimes at the same time, and that can be very confusing. For example, while the Tughlaqs were ruling in Delhi, there were the kings of Vijayanagar and the Bahmani sultans ruling in the south and other small kingdoms elsewhere. So how do historians and archaeologists discover what happened so long ago and also keep track of so many confusing, simultaneous events?