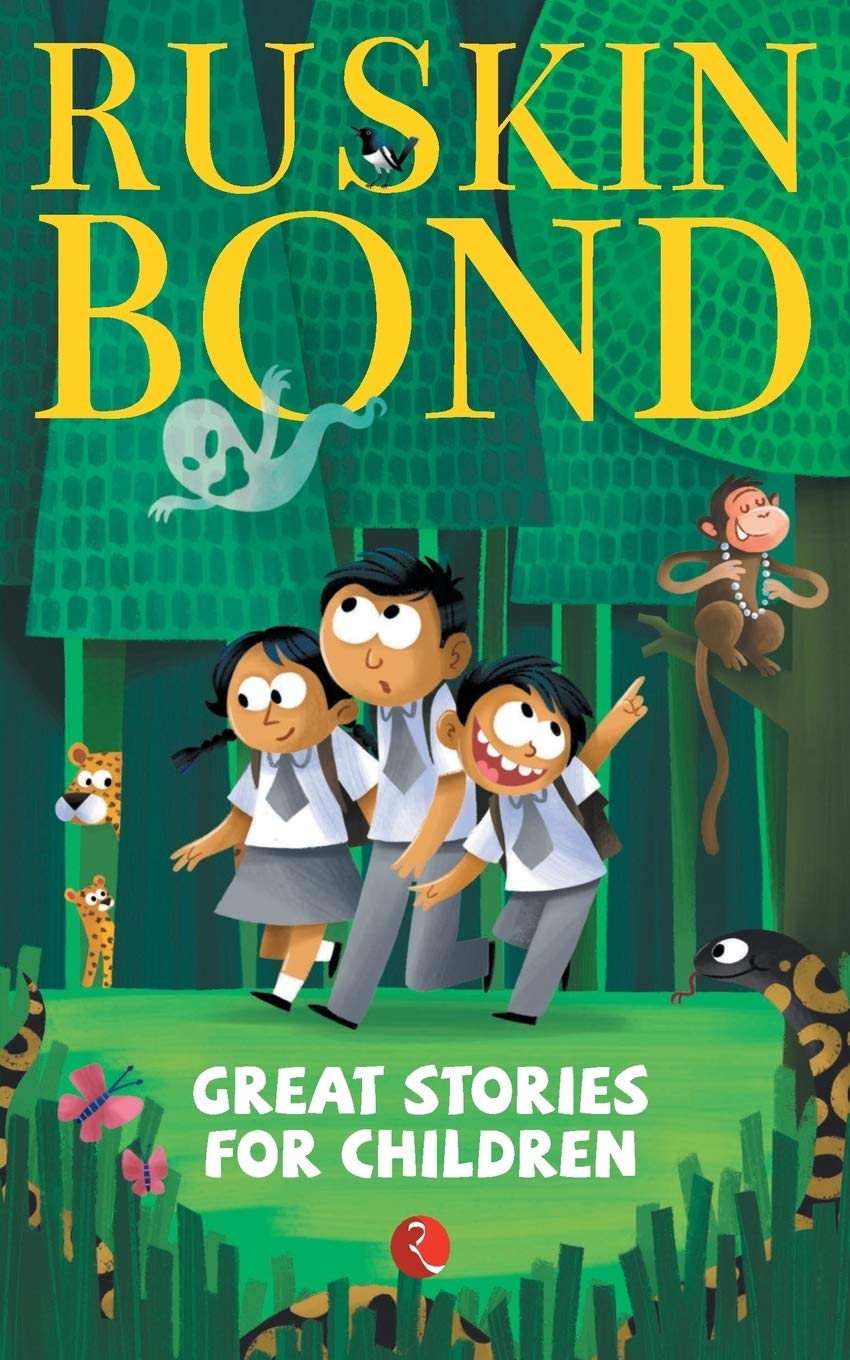 Great Stories for Children is a collection of some of Ruskin Bond’s most delightful children’s stories. It stars Toto, the monkey, who takes a fancy to the narrator’s aunt, much to her dismay, a python besotted by his own appearance, a mischievous ghost who enjoys stirring up the house when things get dull, three young children stranded in a storm on the Haunted Hilland Ruskin Bond himself, who happens to make the acquaintance of a ghost at a resort late one night.

One day, when Rakesh was six, he walked home from the Mussoorie bazaar eating cherries. They were a little sweet, a little sour; small, bright red cherries, which had come all the way from the Kashmir Valley.

Here in the Himalayan foothills where Rakesh lived, there were not many fruit trees. The soil was stony, and the dry cold winds stunted the growth of most plants. But on the more sheltered slopes there were forests of oak and deodar.

Rakesh lived with his grandfather on the outskirts of Mussoorie, just where the forest began. His father and mother lived in a small village fifty miles away, where they grew maize and rice and barley in narrow terraced fields on the lower slopes of the mountain. But there were no schools in the village, and Rakesh’s parents were keen that he should go to school. As soon as he was of school-going age, they sent him to stay with his grandfather in Mussoorie. He had a little cottage outside the town.

Rakesh was on his way home from school when he bought the cherries. He paid fifty paise for the bunch. It took him about half-an-hour to walk home, and by the time he reached the cottage there were only three cherries left.

‘Have a cherry, Grandfather,’ he said, as soon as he saw his grandfather in the garden. Grandfather took one cherry and Rakesh promptly ate the other two. He kept the last seed in his mouth for some time, rolling it round and round on his tongue until all the tang had gone. Then he placed the seed on the palm of his hand and studied it.

‘Nothing is lucky if you put it away. If you want luck, you must put it to some use.’

So Rakesh found a small space and began to dig up a flowerbed.

‘Hey, not there,’ said Grandfather, ‘I’ve sown mustard in that bed. Plant it in that shady corner, where it won’t be disturbed.’

Rakesh went to a corner of the garden where the earth was soft and yielding. He did not have to dig.

He pressed the seed into the soil with his thumb and it went right in.

Then he had his lunch, and ran off to play cricket with his friends, and forgot all about the cherry seed.

When it was winter in the hills, a cold wind blew down from the snows and went whoo-whoo-whoo in the deodar trees, and the garden was dry and bare.

In the evenings Grandfather and Rakesh sat over a charcoal fire, and Grandfather told Rakesh stories – stories about people who turned into animals, and ghosts who lived in trees, and beans that jumped and stones that wept – and in turn Rakesh would read to him from the newspaper, Grandfather’s eyesight being rather weak. Rakesh found the newspaper very dull – especially after the stories – but Grandfather wanted all the news…

They knew it was spring when the wild duck flew north again, to Siberia. Early in the morning, when he got up to chop wood and light a fire, Rakesh saw the V–shaped formation streaming northward, the calls of the birds carrying clearly through the thin mountain air. One morning in the garden he bent to pick up what he thought was a small twig and found to his surprise that it was well rooted. He stared at it for a moment, then ran to fetch Grandfather, calling, ‘Dada, come and look, the cherry tree has come up!’ ‘What cherry tree?’ asked Grandfather, who had forgotten about it. ‘The seed we planted last year – look, it’s come up!’ Rakesh went down on his haunches, while Grandfather bent almost double and peered down at the tiny tree. It was about four inches high. ‘Yes, it’s a cherry tree,’ said Grandfather. ‘You should water it now and then.’ Rakesh ran indoors and came back with a bucket of water. ‘Don’t drown it!’ said Grandfather. Rakesh gave it a sprinkling and circled it with pebbles.

‘What are the pebbles for?’ asked Grandfather. ‘For privacy,’ said Rakesh.

He looked at the tree every morning but it did not seem to be growing very fast, so he stopped looking at it except quickly, out of the corner of his eye. And, after a week or two, when he allowed himself to look at it properly, he found that it had grown – at least an inch!

That year the monsoon rains came early and Rakesh plodded to and from school in raincoat and chappals. Ferns sprang from the trunks of trees, strange-looking lilies came up in the long grass, and even when it wasn’t raining the trees dripped and mist came curling up the valley. The cherry tree grew quickly in this season.

It was about two feet high when a goat entered the garden and ate all the leaves. Only the main

Towards the end of the rainy season new leaves appeared on the tree. Then a woman cutting grass scrambled down the hillside, her scythe swishing through the heavy monsoon foliage. She did not try to avoid the tree: one sweep, and the cherry tree was cut in two.When Grandfather saw what had happened……….Read on to find what happens next.

Other stories included in the book,

The School Among the Pines, The Wind on Haunted Hill, Romi and the Wildfire, Tiger My Friend, Monkey Trouble, Snake Trouble, Those Three Bears, The Coral Tree, The Thief’s Story, When the Trees Walked, Goodbye, Miss Mackenzie, Pret in the House, The Overcoat, The Tunnel, Wild Fruit, The Night the Roof Blew Off, And Now We are Twelve and A Traveller’s Tale.